Cooking has been around for quite a while, according to archaeologists who have nothing better to do than dig up bones and stones out of the earth: ‘Hey, these folks were having a picnic here two million years ago.’

Big deal. All the average consumer can see is a bunch of mud and a few round stones. Archaeologists however can put together a whole dinner party from such evidence.

‘Dinner’ may have been gruesome, at least by contemporary standards: they may well have been having a sizzling bit of one another, as eating your enemies was mode de jour. Imagine Og and Ug sitting around a campfire, as Mrs. Ug walks up and apologizes ‘Sorry fellas, all we have left are some cold cuts from those frisky Neanderthals who thought they could ambush us over behind the Saber-Toothed Mammoth. I can heat up this guy’s rump roast if you like.’

Og complains ‘Neanderthal meat is too tough for me to chew into. What if I break a tooth? There won’t be any dentist around to make an appointment with for another two million years.’

Mrs. Ug shrugs. And when a hairy beast like her juggles her jugs the very earth trembles. ‘Suit yourself, pal. It’s either cold cuts or no nuts, and speaking of which who swiped this dude’s testicles I was roasting?’

They all look guilty. The smell of liver fills the cave as it pops and sizzles on the fire. Like most everything else it started off in Africa. ‘Wonderwerk Cave’ to be precise: ‘At the base of a brush-covered hill in South Africa’s Northern Cape province, a massive stone outcropping marks the entrance to one of humanity’s oldest known dwelling places. Humans and our apelike ancestors have lived in Wonderwerk Cave for 2 million years — most recently in the early 1900s, when a farm couple and their 14 children called it home. Wonderwerk holds another distinction as well: The cave contains the earliest solid evidence that our ancient human forebears (probably Homo erectus) were using fire.’

Not that humans are the only animals who like to enjoy cooked meat instead of the raw variety. Whoever snapped this final picture and saved it for posterity on a memory card did not live to mount in her scrapbook, as a few minutes later what should appear out of the mist but… notorious, ominous airplane-eating Mt. Salak. A couple of hundred feet more altitude and the daring Capt. Alexander Yablontsev, an ex-fighter jet jockey and chief test pilot for Sukhoi, and Alexander Kochetkov, his [worried-looking] co-pilot could have cleared the volcanic ridge but (as they say) “A miss is as good as a mile”.

The beasts of the mountain enjoyed a freshly-cooked feast as they snuffled about and dragged away roasted crew members and passengers (who were already playing their harps in Heaven, where there is no peril from cowboy pilots). When the Search & Rescue teams hacked their way through the thick brush to get to the crash site, they only found bits and pieces of the hapless occupants of the Superjet 100.

A DANCE OF DELIGHT When you apply a hot, naked flame (sounds sexy, no?) to meat or vegetables it tends to glaze an external layer. This is known as searing, and it creates a sealed coating on the outside which helps retain moisture and juices within, to stop food from drying out and losing its flavor as it is cooked. In fact, good quality meat, poultry and hard vegetables like carrots or potatoes remain tender when roasted.

Roasting demands patience but patrons are hungry. So what to do? Hang on, have a beer or four, tell some tall tales and enjoy one another’s company. Maybe roast each other. You know:

Just be sure you’re out of swinging range when you roast Mike Tyson. On the other hand, Prez ManBaby won’t mind you roasting him – he’s been enduring them since he was in diapers.

No, seriously: roasted food is likely the most delicious style of cooking.

Unfortunately, roasting contains so many carcinogens that you might even get cancer of the eyes just looking at a lovely roast on a spit. Who cares. Life is cancerous. You breathe the air, you kiss your boyfriend, you work in a chemicals plant – it’s all the same for Mother Nature. She’ll take care of you, sweetie.

The two main ways of roasting:

1. The oil in the meat is drained away making it less fatty and low in cholesterol.
2. Roasted food is tender and succulent afterwards.
3. Roasting energy and temperature are easy to control.
4. It’s out in the open so it’s easy for the food to be observed.
5. Roasting can easily be adjusted or removed from the heat.
6. When roasting on a spit, roasting dexterity can be showcased to the public.
7. Continuous basting with the meat juices gives the food a unique flavor.

1. Roasting food requires rapid attention to avoid burning.
2. The microwave oven is not so popular with some folks.
3. Experts have warned that roasting animal skin (kanda, kpumo)/cow meat, goat meat with some kinds of wood or charcoal is very carcinogenic.

THE ART OF BOILING

Boiling, or bouiller, is cooking in boiling water. Water boils at 212°F (sea level), and simmers at 190°F. To fully understand the heating process, Julia Child advises the cook to observe water in its various cooking stages, from tepid to real boil, by testing it and using an immersable thermometer and noting the following temperature changes:

Tepid:
85 to 105°F. The water is comparable to the temperature of the human body.

Simmer:
185 to 200°F. There is movement, and little bubbles appear in the water.

The boiling process serves two purposes: it destroys organic impurities, and it transforms raw ingredients into cooked foods. This is important in a developing country like Indonesia as there may be <ahem> “impurities” in some of the food you eat (never watch them make tofu or tempe / never go to a meat-packing plant unless you want to give up eating forever).

Boiling water hardens the albumen in eggs; toughens fibrin and dissolves tissues in meat, and bursts starch grains and softens cellulose in cereals and vegetables. One of the great advantages of water as a cooking medium is that it needs only a vessel and heat to reach and maintain its boiling point, no matter how long or how hard it is heated.

Boiling carelessly can drain away both flavor and nutrition from food. Think English food, which is customarily punished with severe boiling to a point where meat has as much flavor as cardboard and vegetables have long ago given up the ghost. They say “a stew boiled is a stew spoiled”: lengthy cooking at high temperatures toughens the proteins in meats, fish, and eggs, and the rapid bubbling breaks up delicate foods. Recipes for boiled foods almost never indicate boiling for a protracted period of time. Even so-called “boiled” eggs should be simmered after the initial contact with boiling water. Simmering, then, is often used in tandem with boiling because simmering liquid gently cooks fragile foods and tenderizes tough ones.

Only certain foods, such as vegetables, pasta, cereals, and other grains, are truly boiled in water. In these cases, it is necessary to maintain the boil to ensure their proper cooking. Because adding foods to boiling water lowers the boiling point, it is usually stipulated that the quantity of water must be at least three times the volume needed to cover the ingredient to offset the lower temperature caused by their addition. In cooking vegetables, particularly, the amount of salted water will insure rapid boiling, thereby shortening the time of cooking and preserving color.

Boiling is a moist (as opposed to dry) heat process of cooking, others of which include pressure cooking, scalding, simmering, poaching, stewing, fricasseeing, braising, casserole-making, double-boiling, and steaming, as well as partial moist-heat processes, like blanching. The pores of food may be sealed by being dropped into rapidly boiling liquid, but then the temperature is usually reduced to a simmer (185–200°F)—the suitable temperature for cooking soups, stews, and braises.

Try our boiled potatoes at Ya Udah Bistro, perhaps dish on the side of a roasted fish or meat. As a culinary technique, boiling probably followed roasting and preceded baking: it requires containers that are both water-and fireproof, which means pottery.

Firing ceramics dates back at least ten thousand years ago, according to the diligent archeologists who do the dirty work that you and I disdain, scrabbling through barren hillsides in arid tropical war zones.

The large pots hanging in the fireplaces of the earliest kitchens attest to the fact that many meals were slowly simmered, sometimes over a period of days. Talk about having to be patient for your dinner!

“In Taillevent’s Viandier (c. 1364) the cook’s activities centered on a fireplace that featured an adjustable pothook from which large cooking pots hung filled with meats, poultry, game, and vegetables. To control temperatures, the pot’s position could be stationary over temperate ashes or could be swung over the hottest coals. Hot coals or logs could also be moved beneath it. This method of hearth cooking continued into the eighteenth century and even later in rural areas.

“Think of the pot as the emblem of the kitchen and quotes the noted French chef Alain Senderens, who suggests in his Figues sans barbarie (1991) that unlike ‘spit cooking’ or the kind of roasting associated with the early ‘gatherers,’ ‘the cooking of the pot symbolized the feminine domain of the kitchen, family, economy, and, by extension, the civilizing process itself.’

SO! Roasting is masculine and boiling is feminine. Who would have imagined it?

“By preparing food in boiling water in a pot, the cook took what nature provided and transformed it into thoroughly cooked food. ‘From this instant,’ Senderens believes, ‘cooking came to indicate the cultural, intellectual, and technological level of a society’.

It’s hard to tell whether people back then had any inkling of the hygienic properties of boiling, since they had no idea that microorganisms in food or water could cause gastric illness. “Traditionally, boiled dinners and one-pot cooking seemed to be a congenial way of dining in cold climates. From broth-based fondues in Switzerland to the soup kettle that used to hang over the open hearth in the old farmhouses of Japan‘s snow country, variations on sustaining one-pot meals can be found in almost every ethnic cuisine, including the Italian bollito misto, Spanish cocido, and the French potee lorraine. The cold regions of China had a communal dish known in the West as the Mongolian hot pot, named for its distinctive cooking utensil, and a popular contemporary Japanese modification is called shabu-shabu. 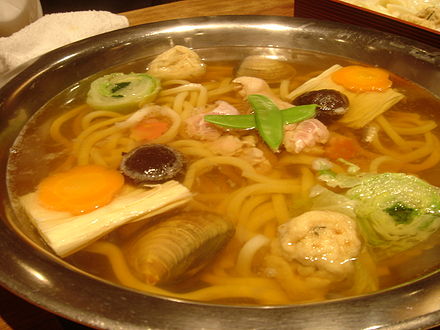 “Asian cooking also has a communal one-pot meal, called nabemono, literally “things in a pot,” which is served at home and in restaurants. Diners do their own cooking, choosing whatever meat, poultry, fish, and vegetables they like from platters overflowing with raw ingredients that they cook over a communal pot of sizzling broth. The broth is continually enriched in flavor as the ingredients are dipped into it.”

So boiling doesn’t have to be boring, contrary to what you may have suffered in a British café.