Ya Udah Bistro > Blog & Updates > Society and Our Times > Shoveling it Down: A History [& Bye-Bye]

Our Farewell Ya Udah Bistro Blog: Indonesia Wises Up to Global Eats

For the final weekly blog from YaUdah Bistro, we look back to the history of foods in modern Indonesia, styles, tastes and trends. It began, properly enough, with the urge of the oppressed Indonesian people to shake off all vestiges of colonial culture, once the tenacious, exploitative Dutch had been driven out of their colonial paradise. You can be sure the stolid Protestant Belanda merchants, once shown the door, acutely missed the tropical luxury of life in the archipelago: there’s no comparison. Just look at tiny, cramped, damp, morose Holland. Cold and gloomy half the year, with freezing winds blowing in off the North Sea. People all clammed up. Nobody smiling. Few opportunities for the ambitious entrepreneur, unless you happen to be “well-connected”. The opportunities for profit and gracious living, with servants and a grand house, formed a large part of what made the adventure of coming out to the Indies so appealing (although in fact malaria and all manner of other colorful tropical ailments, along with snakebites, food poisoning – and the more willful variety – murder and santet took their toll on the hapless Europeans: only 20% of the Dutchman who made the six-week trip around the Cape to the Indies ever made it back to the Netherlands). The effort to establish a Republic of Indonesia started off with a bang, as from 1945 onwards, at the end of the Pacific War, and Japanese occupation of the Indies, the persistent Dutch were intent on seizing back control of their rich colonial possession. The rest of the world was not amused by the attempted suppression of Indonesian independence (bearing in mind that it was a time when India, Middle Eastern and African independence movements were also afoot). Major trading partners like the U.S.A. and European neighbors pointedly pointed out how the Wehrmacht would have still been running the Netherlands if the Allies hadn’t paid a steep price to drive them out. So why impose control over the Indonesians, when they don’t want to see your pale faces any longer?

The young Republic of Indonesia was desperately poor in its early years, as the Dutch stripped away most of what they could carry off when they left, tail ‘twixt their legs… The first President, Ir. Soekarno, was ever the opportunist, having collaborated with the Imperial Japanese Army (to get rid of the unwelcome Dutch) and snuggled up suspiciously close to the Communist bloc, whose come-ons he coquettishly played off against the Western powers in scoring foodstuffs and other elements of survival. The Government in Java was also fighting off a number of attempts at regional secession and running its own hopeless war to wrest the Malayan part of Borneo away from the British.

Soekarno’s Minister of the Economy confessed gaily “I know nothing about economics”, as Zimbabwe-style inflation drove prices sky-high. The solution? Knock three zeros off the thousand-Rupiah notes so they become just one Rupiah. Problem solved.

As our esteemed YaUdah Bistro readers’n’eaters can imagine, during the 1960s there wasn’t much money for dining out, and this conservative society liked its traditional rice dishes in any case. … and the energetic Bataks, finally and reluctantly refraining from the awkward tradition of cannibalism, went down the hatch with roasted dogmeat and puppy soup while loading up on their milky firewater. 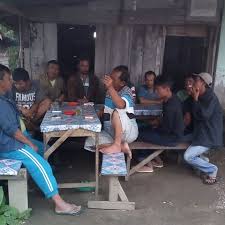 That tradition survives to this day, at hidden eateries like Lapo Tuak, and theft of pet dogs for sale to Bataks is such a persistent problem that many dog lovers here simply give up on keeping the animals and buy a cockatoo instead.

Soekarno was a great orator and spectacular authoritarian leader, who promised much to a desperately poor Indonesian people. As a matter of fact, he even promised that this noble country would have its own atom bomb, a promise making the locals proud (conveniently forgotten afterwards). In his great quest to elevate the archipelagic nation to global power he overlooked some of the basics, like feeding the populace and providing decent public health. Indonesians were hungry. This never came out in the local media, which were controlled closely by the authorities. The Indonesian civil service was dissolving; the country was basically falling apart.

Food shortages and famines occurred in Indonesia during the 1950s and 1960s, but little is known about why and to what extent. Political turmoil absorbed most public attention, and since 1957 the Sukarno government bridled the national press and limited access by the international media to the country’s interior, while the disintegration of the public service prevented centralised systematic data collection. This paper draws on newspaper reports and contemporary secondary literature to analyse the issue. While deteriorating general economic circumstances and crop failures are relevant, the paper concludes that operations of the state-owned food logistics agency in markets for key food crops immobilised food stocks and exacerbated regional food shortages, in some cases contributing to regional famines.

Jakarta inhabitants were lined up in to buy their ration of rice, and when the rumor spread that Chinese rice wholesalers were hoarding their inventory in their gudang to drive up prices, Soekarno threatened to have them shot. Now if survival was that difficult in the capital city, one can imagine the frightening specter of famine across the archipelago.

In such a situation the notion of eating foreign delicacies was simply unworldly.

Eventually, after flirting with the sinister Communist element (and wanting to be on the winning side when the next stage of the Revolution took place) the Founding President over-played his hand and the Army stepped in. There was much killing; the rivers of East Java flowed red with blood. Yet had the PKI (Indonesian Communist Party) succeeded in their coup attempt the world would have witnessed a local version of the Khmer Rouge. That is how terribly polarized the country had become by 1965.

Enter “the Smiling General” and over the next three decades Soeharto’s “iron-fist-in-a-velvet-glove” dictatorship allowed Indonesia to recover; foreign investment crept back in, starting with Japanese companies, Freeport and Citibank; from around 1967, the economy stabilized and from the 1970s onward average Indonesians began to enjoy steadily improving income levels and prosperity. It was a tradeoff: political freedom sacrificed for economic stability and growth.

Those who criticize the Soeharto years – and there are many, particularly among leftists – should be reminded that under Soekarno the average life expectancy of an Indonesian male was about the same as an African: 47. At the end of the Soeharto era that figure had climbed to 69, along with tremendous advances in public health delivery.

And food? In the 1970s, as the violence tapered off and the energy multinationals embarking on new exploration and development, noodles were reportedly considered a great delicacy. Noodles, folks. That’s how hard-up the local consumers were.

Expats would have to make “food runs” to Singapore to buy basic foodstuffs: “Hey, I hear you’re making a business trip outside the country – I’d really appreciate it if you would buy me some baby formula.”

Compare that to the three rows of dairy products, solidly-packed, available in Hero, Carrefour or another Jakarta supermarket today.

In the 1980s the average Indonesian was for the first time presented with the dubious blessing of western fast food (aka “junk food”), as local businesspeople bought franchises from western chains. “Hey look! Kentucky Fried Chicken is opening in Blok M! Let’s head down!” I look puzzled. “Fried chicken? But you have always had really tasty local fried chicken. Why would you want that reheated imported crap?”

They look at me like I was four years old. Because KFC is imported, obviously.

Some fast-food franchises simply did not click: Dairy Queen abdicated. Taco Bell stopped ringing. Others dug in and hoped the locals’ taste would develop.

“Hey guys” I suggested. “How about going for a meal at Pizza Hut?” They made a face and wrinkled their noses. “Cheese? Ugh. That stuff stinks.” Oh dear, I thought. Acquired taste. (Also don’t forget that lacto-intolerance was common among ordinary Indonesians.)

Thirty years later and Pizza Hut is all over the archipelago as a determined survivor and popular family restaurant, for millions of middle-class Indonesians. And nobody today says “cheese stinks”.

“Is it true that they eat… raw fish??” Looks of disgust and disbelief. My, how times change. Today if you want to get into Sushigroove or another Jakarta raw-fish joint on a Saturday night you’d better be ready to stand in line half an hour. Sashimi and sushi are truly in. Another sign of the incredible changes is the growth and evolution of supermarkets. Through the 1980s all you had was the likes of the ill-named Golden Truly (Hello? What language is that supposed to represent? Certainly not English), which was owned by a cabal including the First Lady* and Crony Par Excellence Sudwikatmono. It was a dark and dreary emporium: no fresh produce, no refrigerated foods, just row after row of dusty canned goods and dry foods. The staff were tired-looking and gloomy – what could you expect when you are paid Rp 50,000 a month?

* The standing joke was that the Suharto family was in the mining business: every one of the “Royal Children” and the mother point and shout “That’s mine! That’s mine! No, that’s MINE!” In the mid-1990s life brightened considerably when a local Indonesian-Chinese group opened Hero, which continues prospering as of this writing. Fresh goods, a broad selection of imports, expensive but worth it. They presented an alternative to Kem Chicks, historically the only place for expatriates to buy imported goods. Kem Chicks, whose unofficial motto was “Why pay less?” (Still the most expensive in town, still the best selection of imports) Today the capital city, along with a few second-tier urban centers, presents Indian, Japanese, Latin American and European cuisine of any variety you might wish.

A classic example of the excellent fare on offer is our own Ya Udah Bistro, presenting tasty, freshly-prepared, hygienic Euro-Asian foods, all right-priced. We soldier on through the Pandemic, now offering a Takeout / Takeaway menu replete with delicious offerings. Not to mention a broad selection of German and local beers, lager & stout, along with the best deal on table wine in the capital city: where else can you enjoy a 400ml glass of drinkable red / white / rosé plonk for Rp 70,000? Nowhere, that’s where. To all of our dear readers’n’eaters, faithfully following this blog for the past several years, we wish to announce its retirement, with thanks to those who read and fed back their comments. So long, sayonara, da-da, Aloha!

Chat to order takeaway
Start a Conversation
Hi! Click one of our member below to chat on Whatsapp
The team typically replies in a few minutes.
Order Takeaway
Chat to order for Takeaway
I will be back in 0:55