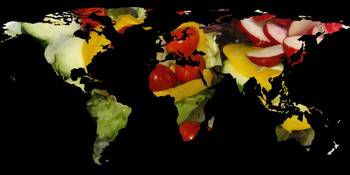 Salad is smart right now, around the world. Salads are big because of the pandemic scare. People who were careless about their health have suddenly waken up to the reality of a very nasty virus going around. And that virus likes to attack those with preconditions – like being a tubby and clogging up your heart & arteries with chemicals and fats.

In short, if you’re interested in staying alive and staying out of the hospital … think salads! So when did “salad” become a “Big Thing”, as opposed to “We were too poor to afford to eat meat so all we had was green stuff to nibble on”?

In fact, the ancient Greeks and the Romans both ate salads, loosely defined as “mixed greens with dressing”. The word “salad” comes from “sal”, meaning “salt” – because in ancient times, salt was often an ingredient in the dressing, along with oil & vinegar. Passing down the centuries, salads became more complicated. Each age had its favorite recipe. For instance, in the Renaissance, dinner salads (much like today’s “chef’s salad”) were popular.

There will always be some artist who takes the practice to an extreme. Here’s this “Celebrity Chef” who put together a thousand-dollar salad for some hungry rich showoff. A History of the Salad Days

Those who could afford to do so had their chefs make “composed salads”, called “Salmagundi” in the 18th century, assembled with layers of ingredients. What makes a salad different from a wild pig foraging for greenery in the bush is its dressing – normally the strongest flavor in the mix.

“Etymologically, the key ingredient of salad, and the reason for its getting its name, is the dressing. The Romans were enthusiastic eaters of salads, many of their differing hardly at all from present-day ones – a simple selection of raw vegetables—and they always used a dressing of some sort: oil, vinegar, and often brine. And hence the name salad, which comes from Vulgar Latin Herba salata, literally ‘salted herb’.”
– An A-Z of Food and Drink, John Ayto [Oxford University Press: Oxford] 2002 (p. 294)

“Although the ancient Greeks and Romans did not use the world “salad,” they enjoyed a variety of dishes with raw vegetables dressed with vinegar, oil, and herbs…The medical practitioners Hippocrates and Galen believed that raw vegetables easily slipped through the system and did not create obstructions for what followed, therefore they should be served first. Others reported that the vinegar in the dressing destroyed the taste of the wine, therefore they should be served last. This debate has continued ever since…With the fall of Rome, salads were less important in western Europe, although raw vegetables and fruit were eaten on fast days and as medicinal correctives…The term salade derived from the Vulgar Roman herba salata, literally ‘salted herb’. It remained a feature of Byzantine cookery and reentered the European menu via medieval Spain and Renaissance Italy. At first “salad” referred to various kinds of greens pickled in vinegar or salt. The word salade later referred to fresh-cooked greens of raw vegetables prepared in the Roman manner.”
—Encyclopedia of Food and Culture, Solomon H. Katz, editor and William Woys Weaver, associate editor Well you can thank the 1930s, quite likely, with the invention of the Cæsar salad. It was a sensation. A World of Varieties for the Salad Lover

Today more than ever salads are a Big Thing, worldwide, in line with the “New Normal” of eating healthily, eating less and feeling better, cutting out the over-processed junk food for something natural – even if you don’t particularly like it. You should learn to like them! Apart from the health benefits, salads will make you feel better, lighter, less bloated and fatigued by food (starch and meat put a real heavy load on the gastrointestinal tract).

Among the principal types of salads are: Green salad ~ Fruit salad ~ rice and pasta salad ~ Bound salad ~ Dinner salad and Dessert salad. Some are healthier than others (beware of those salad dressings loaded down with sugar or other deadly sweeteners).

Mourning the Loss of Pick’n’Choose The “All You Can Eat” Salad Bar – alas, gone, gone, maybe gone forever – in the time of the pandemic nobody will be able to snuffle around, mosey around, pick and choose by hand. Not hygienic enough.

Experimentation abounds, with weird & wonderful salad types. There are truly thousands of salads, many of which I bet you have never heard of. Hey, how about a “Candle Salad”? Now comes the fun part. Head down to Ya Udah Bistro for the finest of the finest in Euro-Asian cuisine, and among the exotic items on the menu is a pickled cabbage salad that will go ZINGG!  – complementing the other foods on the table. Fine Euro-potato salad, heavy and creamy. Chef’s salad, fresh and healthy. We are open for the honored patrons strolling by, at the Menteng and Serpong branches.