Agree or Disagree? DECRIMINALIZE ALL NARCOTICS

Of all the spectacular and gigantically-expensive failures bedeviling the USA in recent years (over and above their endless unwinnable wars, annoying and enduring racial tension and tolerance of poverty, including hungry children) none is more brutally evident than the so-called “War on Drugs”, generally dated from the riotously corrupt presidency of Richard Milhous “aka Tricky Dick” Nixon but actually carrying a long and weary history adorned with insistent

Do we hear the mumbles of “doubting Thomases” among our noble readership? Well just consider how convenient and cheap it is to secure cocaine, heroin or amphetamines anywhere you go in the good old USA today – and not just in the big cities! White-bread white small town family-values America is doped up to the gills as well, with “substance abuse” (encompassing both “controlled” – illegal – drugs as well as the myriad legal “mood enhancers” that zonk you out with a nice prescription).

So the War on Drugs has failed. Oh not it hasn’t. It saved the bacon of the TBTF banks during the 2008 crisis. Say, have you enjoyed the bacon at Ya Udah Bistro recently? Who can be against bacon? Ya Udah Bistro Bacon image from of Nibble website

(Sorry to hijack my own thread, but, well, bacon is bacon.) Who is going to turn down three hundred fifty two billion dollars? “In many instances, the money from drugs was the only liquid investment capital. In the second half of 2008, liquidity was the banking system’s main problem and hence liquid capital became an important factor,” he said.

Sweet! $352 billion is the by-guess-and-by-God estimate of the global narcotics trade revenue at that delirious moment (2008). So we are talking big money (along with the destruction of lives).

Who really could be against abandoning the useless, painful and destructive War on Drugs? Well, as always, those who benefit handily from it: Also there is the curious and untouchable interlacing of narcotic drugs and political realities: Cannot disturb Deep State’s money-making apparatus now, can we? Patriotic Americans these days aren’t even fazed to hear that their patriotic soldier-boys are facing danger on a daily basis in Afghanistan, guarding the poppy fields of opium producers, the beginning of the upstream-downstream rollercoaster of cheap heroin. So we are looking at the huge downside and tragedy in human lives caused by the “War on Drugs”. Well, what are the arguments against legalizing – or more precisely “decriminalizing” – private consumption of whatever the hell you want to destroy your brain with? A look at history is not encouraging. The Victorian era is usually thought of as proper and repressive, clamping down on sex and all sorts of fun. In fact, cannabis from British India was extremely popular, along with various derivatives of opium. 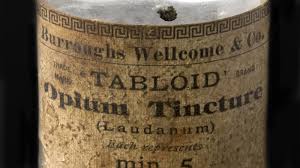 Hard-working farmer McClintock would come into town on Saturday to get his “health tonic”, the active ingredient of which was opium. Pretty soon farmer McClintock, his wife and field hands were coming into town three times a week to get their happy fix: they were addicted and didn’t even know it. Thus Government, alarmed, happy holder of the “monopoly on violence” got into the act by outlawing this and that and everything else they could, one drug by one. Dentists found cocaine an excellent local anesthetic, but alas it soon proved too excellent so the dentist and his assistant and the nurse and their kinfolk were soon anesthetizing themselves with the “Peruvian marching powder”. The name “heroin” was bestowed by astonished medical practitioners because it was a “heroic drug” that did away with the intense pain associated with cancer, surgery or war wounds. We know how that turned out. Even doctors and nurses turned into junkies.

The libertarian notion of getting the Government out of the narcotics control business is based on the principle that we are the masters of our own bodies and should be able to take into them whatever we please, as adults, without nosey Government interference. Prison population would plummet; police would have more time to focus on real crimes of property and violence (also heightened by junkies desperate for their next fix). Portugal has tried this and it apparently succeeds.

This writer truly enjoys his social interaction with his Chinese and Chinese-Indonesian associates and friends, as they have lively minds, not muffled and damped down by religious brainwashing. One topic that inevitably gets them alarmed is my mild suggestion that we should bring back opium dens – but strictly for the elderly. Think about it. Here’s an old fellow in his 80s; he has worked hard his whole life, raised a family, paid his dues to society in full. So why should he not be allowed in his “twilight years” to stay in a dreamy opioid haze of opium smoke?

“But what about the children?” they [predictably] squawk. I answer “The 80-year-old children will be fine in their opium dreams”.

Opium addiction nearly destroyed China, when the British colonial narcotraficantes, history’s first and foremost drug barons, the forced their way in. The weak Imperial Government attempted to outlaw opium and stop the trade but failed in the face of English warships firing on villages. They had a huge marketing problem: too much opium produced and not enough of a market for it. Thus they targeted China. And the Chinese even today have not forgotten.

Of course the real reason that Governments suppress all the pleasurable drugs is because they are funded by Big Pharma, which would prefer for you to be addicted to their expensive – and dangerous – and frequently addictive – delights:

Don’t be worried that your bus or airplane driver or pharmacist or nuclear plant technician is hopped up on one or more of these powerful “mood-enhancers”. Why? Because they’re legal!

And have a nice day, folks? See you at the Bistro, where food takes the place of any illicit pleasure.

So what do you say:

DECRIMINALIZE ALL NARCOTICS for adults

WHAT DO YOU THINK