PART ONE OF FOUR

They all looked at him, puzzled.

‘But first the carburetor cleaner. Waitress!’ he bawled. 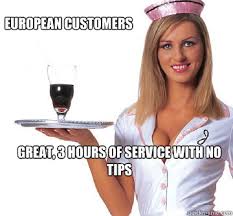 Waitress was one of those extinct or near-extinct beasts, like the Javanese rhino. Or the sasquatch. Loch Ness Fish Sausage I mean Loch Ness Monster, aka ‘Nessie’??

The others joined in the mournful chorus. Descending slowly, majestically, out of her Dreamland, where they are lost in fantasy and contemplation, a waitress oh-so-slowly turns their way. Can they catch her dreamy-eye?

No, alas not. She is lost in reverie. ‘Hurry dear, this man is in danger of death from dehydration!’ squalls Lulu, pointing at the swooning Alan, her piercing divorce wail finally cutting through the misty void. Lulu uses her ‘pointing-and-shrieking-at-the-bum-she-made-a-mistake-marrying-and-wants-to-be-rid-of-after-taking-50%of-his-assets-including-the-fucking-half-a-million-smackers-he-has-squirreled-away-in-a-Nassau-bank-courtroom screech’.

The waitress, alarmed and fearful, finally pops to. ‘So here comes the industrial solvent’ growls Brett, a solid beerman of the old school.

Paul draws himself up haughtily. ‘Sir, I will have you know that this Hatten is no longer to be despised with those undrinkable foully fermented Balinese elixirs of yore.’

They stare at him. He lifts a glass of white Hatten theatrically. Our Paul is a theatrical fellow. In order to succeed in business he has to have an actor’s dramatic [bullshit] poseur pose. ‘It is on the way to the stars. It is more than “drinkable”. This Hatten is truly to be enjoyed. Asian Winery of the Year.’

Brett yells ‘A toast to Bali!’ They are all impressed by Paul’s revelation. ‘Asian Winery of the Year.’ Impressive.

‘No shit!’ bellows Brett, GLUG GLUG GLUGGING another Yaudah Bistro Weißbier. This has followed the Euro- and Japan-table’s guzzling of a Prost, an Erdinger [ACHTUNG!], a Guinness and now I’m too drunk to go on >hic<.

‘Please’ frowns Paul. ‘You are truly an offensive fellow ofttimes.’

Alan (annoyed) ‘Well God-damn it. May I please continue my fucking story?’

Lulu (sympathetically): ‘Alan you are a jewel. You belong in a tiara. Please ignore these ruffians and poseurs and proceed with your narration.’

Alan sighs and drones onward. ‘Everybody figured Hank was a faggot. All the other teachers watch him to see whether he was making googly-eyes at male students.’

‘I figured he was one of those rare “asexuals”, a category that a lot of folks simply refuse to believe in.’

Lulu: ‘I for one. I don’t buy it. Human beings are fuckers. Everybody has a “sexual quotient” at some time in their lives. It’s just a matter of tickling it to open them up. Trust me on this.’ ‘Ah!’ she exhales with finality. ‘Beer is the answer. No need for the question’

Alan darted her a dirty look. Was she trying to derail his story again?

‘Anyway this Hank was an adequate ESL teacher if something of a drip. Boring guy, boring in the class. Just what you need for the TOEFL or IELTS grind.

Alan looked around, eyebrows raised. ‘See? It’s only a woman who can divine where such a thrilling story leads.

‘He fell for Ayu, a little dark-skinned girl buried in a jilbab. She broke his heart.

‘He looked at her. She avoided his glance at first… then, piercingly, stared back at old middle-aged pot-bellied Hank. Like she had never looked at a man before.

‘The two of them were hungrily entranced with one another. What she saw in this faded, mild-mannered whitey is beyond me. What he saw in this quiet, serious, overly religious teenager is equally beyond me.

‘No accounting for taste,’ Lulu drily notes. ‘How many times have I been introduced to a husband-and-wife only to think to myself “This is highly unlikely”. But there you go.’

Alan sighed, and sipped his delightful Hatten red wine, thinking to himself ‘Nowhere else in Jakarta do I get to drink wine for Rp 72,000 a glass. And a full glass at that.’

He continued his doleful tale. ‘School had a strict policy against fraternizing with the customers. No can do. No romance. Hands off. No secret trysts outside of classroom hours. ‘Bad for business. And old Hank had been warned.

‘He was frankly frightened,’ Alan sighed. ‘This little chickie in her hoodie was stirring emotions in him he’d not felt since Marilou Perkins grabbed his dick at the age of twelve.’

‘On they studied. Class after weary class persisted. Hank droned on with “Tricks for TOEFL”. But every time his glance happened to stray to Ayu – that was her name – he saw her staring at him. And not the way a student pays attention to the teacher either.

‘He says he felt a twinge in his dick. Can you imagine? Thirty-seven years old, almost a virgin – like Cyndi Lauper – and his passions suddenly surged. BUT he was the teacher! He was in a fix.

‘Enter Walter Weller, old fat Walter they all called “Wally the Walrus” because of his heavy mustache (that he refused to shave off, in spite of the school’s scolding).

‘Wally was a “barracks lawyer”, the guy who will happily share advice and counsel with you about anything: money, romance, legal matters, medical issues. And the advice he gave was unremittingly bad advice.

‘So all you had to do was ask “Wally, what should I do about this cute girl who keeps staring at me? She makes me, well, uncomfortable. Hot and bothered.’

‘Don’t call me “Wally”’ the other growled. ‘This is Indonesia. Indonesia is a serious place with serious people. Are you serious about her?’

He suddenly felt like he had stepped into a dark elevator shaft and was falling, falling into a warm darkness…