COMPETITIONS YOU CAN SIMPLY DISBELIEVE IN

“Citizens today apparently have too much time on their hands. Across the planet folks like you and you and him and her are going nuts for something to keep them busy and amused, and their minds off inevitable death, filling up those yawning hours that the lower classes use for bare survival.” “Are you out in the cotton fields from early morn… …avoiding slave driver Simon Legree, kicking away snakes and hoeing hard earth under a blazing sun? I daresay not. “Are you driving your aged, wheezing taxi through fierce, tangled Mumbai traffic, trying to avoid being snarled for hours in the heat? No way. “As a person of leisure <snicker> and esteemed patron of Ya Udah Bistro, you most likely do your job in a nice air-conditioned environment, then glide around to Old Menteng for an evening of pasta, wine, sausage and song …

… and then you go home to find the clock has stopped. Or so it seems. Oh what to do to while the hours away…”

Oh dear. Well, being that the human race is descended rather recently from a tribe of apex killer primates (“Who? Me?” you protest. Yes, you. And me.) we like to compete. Struggle for primacy, supremacy, domination – even when the results are awkward. Thus the Darwin Awards, dating back to 1985, the Stone Age of the Internet. To be awarded a “Darwin” (or have your surviving kinfolk receive one on your behalf) you have to die or nearly die or at least render yourself incapable of reproducing, so you will not curse the Earth with offspring as dumb & reckless as yourself: “An early post, on August 7, 1985, describes the awards as being ‘given posthumously to people who have made the supreme sacrifice to keep their genes out of our pool. Style counts, not everyone who dies from their own stupidity can win.’ This early post cites an example of a person who pulled a vending machine over his head and was crushed to death trying to break into it. The official Darwin Awards website run from 1993 by Wendy Northcutt does its best to confirm all stories submitted, listing them as ‘confirmed true by Darwin’. Many of the viral emails circulating the Internet, however, are hoaxes and urban legends.” 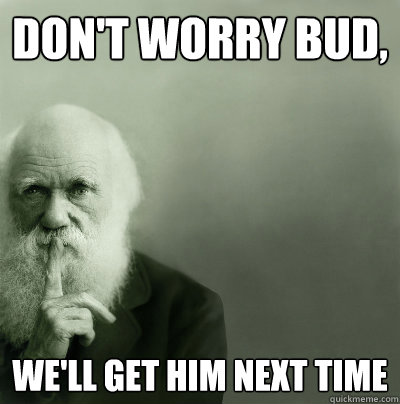 Of course the more serious prizes and awards are surmounted by the Nobel Prize (not to be confused with the ‘No-Belly Prize’ for the fatties who have slimmed down). Everybody in the world knows of the Nobel Prizes for achievements in physics, chemistry, medicine (or physiology), literature and peace. Alfred Nobel invented and commercialized chemicals that would go BANG very efficiently, such as military-grade smokeless gunpowder, thereby arousing the interest of armies and governments the world around. Much more effective wars with higher tolls of injured and dead were sure to follow. The prize committee was set up in part so that his legacy would not be that of a ‘merchant of death’. This charming eyewitness report of the first Awards Ceremony shows how times have changed. Now among the more amazing candidates for  Nobel Peace Prize, since just about anybody can be nominated for it and with the likes of warmonger Barack O-Bomber and Henry “War Criminal” Kissinger being past recipients (I wish this were satire but it is not) then why not Agent Orange, I mean Prez ManBaby Donald J. Trump? He’d be a shoo-in, if they were fair in Norway and Sweden (and not just intellectual dummies).

Maybe the reader has forgotten nonagenarian Kissinger: the award of the Peace Prize was the most controversial ever: “Kissinger’s history included the secret 1969–1975 bombing campaign against Khmer Rouge and North Vietnamese Army troops in Cambodia, the alleged U.S. complicity in Operation Condor—a mid-1970s campaign of kidnapping and murder coordinated among the intelligence and security services of Argentina, Bolivia, Brazil, Chile (see details), Paraguay, and Uruguay—as well as the death of French nationals under the Chilean junta. He also supported the Turkish Intervention in Cyprus resulting in the de facto partition of the island. According to Irwin Abrams, this prize was the most controversial to date. Two Norwegian Nobel Committee members resigned in protest”.

‘Pop icon Michael Jackson found himself in the running in 1998.

‘Even though many of the child sex abuse allegations against the “King of Pop” had not surfaced at the time, the artist’s message to “Heal the World” did not impress the Committee. In this photo taken on March 5, 2009 US pop star Michael Jackson addresses a press conference at the O2 arena in London. (AFP PHOTO / Carl DE SOUZA)

‘The Romanian parliamentarians who proposed Michael Jackson considered this nomination to be very serious, but it was not considered by the Committee either,’ said Lundestad. Well we’ll have to give the absolutely most brilliant prize for prizes to the Humpy Award, embodying the absurdity of existence as well as the undying affection of dogs for their masters. (Or for their legs anyway.) Meanwhile dinner is awaiting the reader at the majestic and hospitable Ya Udah Bistro, now in Serpong (with a special non-smoking air-conditioned section) as well as the classic location in Menteng, near Gondangdia Station. Ya Udah Bistro is an historic site in Central Jakarta, and featured approvingly in famed tour guides like Lonely Planet. Come around, eat, drink and make merry. And forget about the prizes and awards. They’re all crooked.

Enjoy our great selection of European and Asian cuisine and drinks, along with an elegant, polite mood, good company and a breezy outdoor atmosphere where you can smoke and laugh and yell to your heart’s content.