The world can be an inexplicable, dangerous place. Thus travelers often prefer the familiar. Brits holidaying in Spain, soaking up the sunshine, are notorious ethnocentrists, demanding their fish’n’chips or kidney pie in a land of paella. Americans travel to China and end up yakking to each other in Starbucks, complaining about the fact there are so many noisy, spitting Chinese around. When this writer first arrived in Bangkok (late 1960s), like anyone unacquainted with a new culture, he was alert and aware to cultural subtleties – something that disappears as one settles in and becomes used to a place and its people.

One tends to pick up on similarities as well as differences … the unexpectedly familiar mingled with the exotic (remember your first visit to a dreadful McDonald’s in Moscow, in the midst of winter).

And then it quietly came to me: this feels like Texas. In Thailand, the same diffidence, politeness, watchfulness. You are discreet in your dealings with strangers because you naturally assume that they are packing heat: street-sellers, Bangkok taxi drivers, others in traffic, strangers in a bar – they may all be carrying concealed firearms. What’s more, a combination of heavy drinking and a mercurial personality may result in more unfortunate confrontations.

Thailand has the highest reported rate of gun-related deaths in Southeast Asia – almost 50 percent more gun homicides than the Philippines. With 7.48 registered violent gun deaths per 100,000 people, the rate is also twice as high as that of the US, which had 3.55 deaths per 100,000 people in 2013, according to data provided by the University of Washington’s Institute for Health and Metric Evaluation.

As the US State Department’s Bureau for Diplomatic Security wrote in its 2013 safety report for overseas staff: “Thailand has a fervent gun culture on par with the United States and has become a world leader in firearms-related homicides.”

But that’s not all. Just like in the US, the Southeast Asian nation also has a high gun-ownership ratio. According to Thailand’s Interior Ministry, there are currently more than six million registered guns in a country with a population of 66.7 million – meaning that about one in ten people in Thailand legally own a gun. Back home in Texas it may be the familiar sight of the gun-rack in the back of a pickup truck – a signal that the driver is locked and loaded (and not to be trifled with by a road rage driver). What’s the deal? Well for one thing lots of ornery varmints down Texas way: rattlesnakes, 400kg wild hogs, water moccasins – not to mention other equally-heavily-armed drivers, maybe drunk and angry. Texas is said to be particularly dangerous for sitting Presidents. Now down Texas way, when your dad decides that you are a “big boy”, he may give you your own .22 rifle. This demonstrates his trust in you – his confidence that you know how to handle a deadly weapon responsibly – usually sometime around your 12th birthday.

The Lone Star State has a dynamic “gun culture”, pure and simple. Just like Thailand, known as the “Land of Smiles” (and gunfire). For fun-loving, gun-loving Thais, weapons are like fashion accessories. 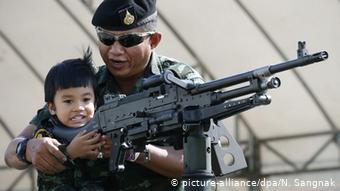 A True Story: this author was a front-seat passenger in a nice new sedan driven by a woman manager in a Japanese-owned factory – a well-educated middle-class Thai businesswoman, from a prominent family.

His hand happened to fall near the gearshift lever and felt something cold, metallic and hard. He looked down: a snub-nosed .38, loaded. 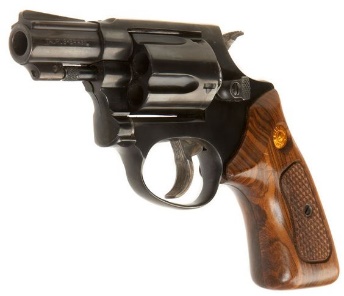 The lady driver giggled sweetly: “It’s my little baby.” He smiled back.

For a moment of contrast: just cross the southern border into Malaysia from gun-loving Thailand and a pistol – or even one bullet – found in your possession could snare you big trouble:

Any person who is in unlawful possession of a firearm shall be punished with imprisonment for a term which may extend to fourteen years and with whipping with not less than six strokes.

Quite a nasty surprise (and hangover from “The Emergency”: the final years of British colonial rule in Malaya, when the British Army was engaged in jungle warfare against domestic – mostly ethnic Chinese – Communist insurgents. At that time being caught with an illegal weapon could earn you the death penalty.)

Divide the world into two: global gun cultures and those nations abstaining from private ownership of firearms.

The philosophical question naturally arises: should private citizens be allowed to keep firearms, or is that the prerogative of a governing regime? This fine hirsute fellow is often cited in discussions about the tricky matter of private ownership:

Maximilian Karl Emil Weber (21 April 1864 – 14 June 1920) was a German sociologist, philosopher, jurist, and political economist, who is regarded today as one of the most important theorists on the development of modern Western society. Americans are the most famed gun-owners in the world, and while there are regions, like New York city, where possession of an unlicensed firearm can get you some serious time in the pokey, much of the country firmly backs the Second Amendment to the United States Constitution: “A well regulated Militia, being necessary to the security of a free State, the right of the people to keep and bear Arms, shall not be infringed.” COMRADES! TURN IN YOUR WEAPONS!

Americans are fond of pointing out that dictatorships – particularly Communist ones – take care to disarm their citizens. Thus they do not fancy being left helpless against an aggressive military (even though Big Government is infinitely more powerful than any single individual or group).

Now whether that means that some gun nut in Alabama has the right to hoard an armory of military firepower, barricading himself and his family against a government and military armed with thermonuclear weapons, is another matter altogether. (Sounds nutty, right? Rest of world nods. Americans look pissed.) Part of it comes from a nation absorbed in endless wars across the world, mostly for oil & markets. “Bring the War home” was a popular refrain during the era of the American aggression on Vietnam. The gun violence even spills across the border into Mexico, where a multi-billion-dollar narcotics trade has created heavy-armed cartels at war with both the Mexican government and one another… (Nice-looking lady but she’s not so nice-looking any more – she’s pushing up daisies, six feet under…) What do you think: should you let your nine-year-old daughter play with a machine-gun… 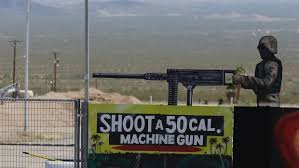 … in a tourist-oriented firing range? Nine years old? Really? Bad move: she was firing on full-auto, the gun reared back and blew out the brains of her eager instructor. GAME OVER. There is a price to pay for living in a free-fire zone: BUT NOT IN SWITZERLAND

No Schweiz? Why not? Well let’s leave the trigger-happy New World, as the issue will never get solved in the good old bad old USA, until they run out of ammo. Let’s jump across the pond and look at another, quite different, “gun-loving” society. There are so many Swiss citizens expert in using firearms that during the German invasion of western European countries in World War II, Führer Adolf Hitler decided against invading the small landlocked nation, concluding that it would take too long and cost too many Wehrmacht lives, with the Swiss mountain passes bristling with native snipers.

So he went for easy-going Yugoslavia and Greece instead. Actually the Swiss are allowed to own and store firearms in some of the most liberal laws in Europe. But if you look for Switzerland on the “Firearms Deaths” chart above you’ll be sorely disappointed because it’s not even worth bothering about. The Swiss know how to take care of their popguns. They love to shoot. Me too. Hey, what’s that guy doing shooting a selfie of the shooters back in 1925? Hasn’t he heard that digital cameras won’t be invented for another 80 years? Bad move.

None of that nonsense when you wine and dine at Ya Udah Bistro, newly-reopened at both the Menteng and Serpong outlets, with “New Normal” protocol: face masks, distance-seating, ultra-hygiene and the trained staff wiping down and sterilizing everything except the patrons (they’re really trained well). Best of all, NO WEAPONS (also NO DRUGS, NO FIGHTING, NO OUTSIDE FOOD and NO NAUGHTY FELLOWS) (no names mentioned). Jakarta’s best Euro-Asian cuisine, still available at a right price, for takeaway and home delivery (for those stir-crazy patrons still stuck in their dwellings). Check us out. And be glad you live in Jakarta, one of the safest big cities in the world. Really? Really. And one main reason is the absence of firearms in private hands. Who needs it.