Ya Udah Bistro > Blog & Updates > Society and Our Times > If the kiddies fear Santa so much… and in the 21st Century he might seem obsolete..then WHAT’S THE POINT?

If the kiddies fear Santa so much… and in the 21st Century he might seem obsolete..then WHAT’S THE POINT? Ho Ho Ho, and to all a very Merry – Whaa?? Do we not see here a typical encounter between a typical Santa-suit-clad old fellow and some typically-terrified small children?

The spectre of little kids sitting on Santa’s knee in the Mall – so how about you, Citizen, do you remember the horrid experience? Hey, can YOU remember YOUR first encounter with this jolly red OGRE, on an early Xmas? Photographed by (one assumes) unconsciously-sadistic parents? It really makes no sense to subject a small child to being grappled with by a fat red alien, especially in a world as dangerous as this one.

Some kids, when encountering Santa, take matters into their own little (if lethal) hands.

Occupational hazard of being a department store-Santa – not part of the Work Agreement, WOW. THERE REALLY WAS A REAL SANTA, REALLY… …and he was a fine, compassionate fellow. Today he’s a real saint. “ ‘The legend of Santa Claus can be traced back hundreds of years to a monk named St. Nicholas. It is believed that Nicholas was born sometime around 280 A.D. in Patara, near Myra in modern-day Turkey. ‘Much admired for his piety and kindness, St. Nicholas became the subject of many legends. It is said that he gave away all of his inherited wealth and traveled the countryside helping the poor and sick.

‘One of the best-known St. Nicholas stories is the time he saved three poor sisters from being sold into slavery or prostitution by their father by providing them with a dowry so that they could be married. ‘Over the course of many years, Nicholas’ popularity spread  and he became known as the protector of children and sailors. His feast day is celebrated on the anniversary of his death, December 6. This was traditionally considered a lucky day to make large purchases or to get married. ‘By the Renaissance, St. Nicholas was the most popular saint in Europe. Even after the Protestant Reformation, when the veneration of saints began to be discouraged, St. Nicholas maintained a positive reputation, especially in Holland.’

Around the world the Santa legend has taken many a strange turn. It does not have to be so stale and repetitive, actually. The Japanese, always ones with a fresh and zany take on western phenomena, combine religion with folklore in a wondrous manner: 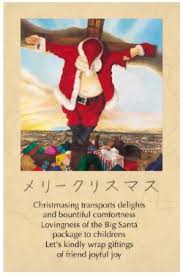 Do not be offended: think of it as a ‘twofer’: getting religion and the popular folklorish spirit of Christmas all wrapped in one. In Janglish (Japanese English) to boot. Meanwhile in the unhappy bearded Caliphate of Eurabia, the very sight of a Christmas tree disgusts a certain prominent element of the populace, as ‘new Belgians’ set fire to it. Away with tradition (they whine). Down with Xmas (they growl). Santa – are ye doomed?

Well maybe after all Santa is best chucked into the dustbin of history, as the Marxists are fond of chuckling, considering that a goodly percentage of them are pretty unsavoury characters the rest of the year. ‘Drunken Santa’ is kind of an oxymoron.

You want such a bulbous stranger in a beard costume bouncing your precious snowflake on his knee?

Well since we live in such a technology-obsessed age perhaps it is best to complete this brief visit with Saint Nick with – an engineering look at the matter.

Fun & good times are however alive at the Bistro, as they have been for over two decades now.

We wish you a very Merry and Marvelous and Magical Christmas, from all at Yaudah Bistro, open all through the Christmas and New Year’s holidays seven days a week, until the wee hours – never closed for holidays.

Keep the holiday fun, look appealing and stay healthy, with ‘social drinking’. And try not to be a cunt, as the ladies merrily sing it.

Drop around for dinner, awaiting the reader at the majestic and hospitable Yaudah Bistro, now in Serpong (with a special non-smoking air-conditioned section) as well as the classic location in Menteng, near Gondangdia Station. Yaudah Bistro is an historic site in Central Jakarta, featured approvingly in famed tour guides like Lonely Planet. Come around, eat, drink and make merry.

Smoke, drink, eat, laugh and yell to your heart’s content, in an elegant, polite environment, a breezy outdoor atmosphere where you can celebrate the holidays nearing 2020.

Hey, thanks for reading our Yaudah Bistro blog. Please check out some of the earlier newsletters on the Yaudah Bistro website. We do appreciate your comments on these fanciful expositions as well. All Comments welcome!