Conjectures of Conspiracy down through the Ages Information possesses pressure. The more urgent the demand for data, the higher the flow rate, the greater the pressure. The more confidential the information, the tighter the containment. Sooner or later, as history invariably informs us, the demand to know will be too great, or there will be too many cracks and weaknesses in the vessel of secrecy (humans basically being blabbermouths). All will be revealed – or at least someone’s version of ‘All is Revealed’. 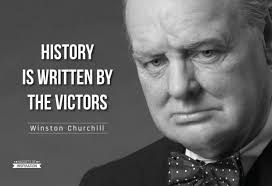 As time passes, people age, some feel the need to confide, or confess, for a variety of reasons. By that time the hidden acts, the plots, the intrigues – all have been drained of importance. All concerned are infirm, senile or dead. That which is conspired upon no longer has value. The conspiracy is thus devalued, and opened up.

“…accused of conspiring to overthrow the government…”

“…conspired to monopolize and restrict trade…”

Will people believe the facts of the matter, when the steaming underbelly of the conspiracy splits open and the guts are spilled? Later maybe. Above we see one of the most famed conspiracies of ancient history: the Roman Senate, alarmed at his acquisition of power, decides in secret to perforate the famed general, orator and politician Julius Cæsar. Remember though how he was warned: Consider the elements of the plot to assassinate the great Roman leader:

Here’s what was going on in Rome at that time: the empire had faced a century of challenges and violence. Fighting (an eventually winning) the latest civil war only strengthened Caesar’s rule of Rome. At first he had been meant to be absolute ruler for one year. Then a decade. Soon enough, he was named dictator for life. “Rome had never had a dictator for life, much less a dictator for ten years, and people were very sensitive about that” says Barry Strauss, a professor of history and classics at Cornell University, and author of The Death of Caesar.

The ruler tried to convince the Roman people, particularly the nobility, to follow him—but it didn’t work. Rome’s elite reached the conclusion that Caesar’s real goal was to be “an uncrowned king of Rome,” Strauss says, and leave Rome’s traditional nobility “holding empty titles without real power.” Some even saw his affair with Egypt’s Queen Cleopatra and the recent adoption of a calendar based on Egypt’s as evidence he wanted a monarchy like Egypt’s.

Those familiar with the science of Criminology may recall the three elements that police investigators faithfully abide by when initially taking on a case: In this case the ‘MEANS’ are a group of unhappy Senators who see their power (and potentially their treasure) being carved away by an ambitious dictator. They will secret knives inside their robes; they have rehearsed their planned attack over months.

The ‘MOTIVE’ is quite clear: the Roman Republic was in danger of turning into a dictatorship with a monarch (which did, alas, come to pass in any case, as history is a mean trickster). Cæsar wanted absolute power; this is a ‘zero-sum game’ as his acquisition of such power would mean its loss by the Senate.

Trickery, lies and deceit provided the ‘OPPORTUNITY’: it was Cæsar’s close friends and allies who convinced him to attend the Senate on the day of his death, in spite of his own misgivings. Timing was all-important, as he was to leave Rome with his soldiers in three more days. Marc Antony, the only ally who could have spoiled the plotted killing, was waylaid on his way to the Senate. Aspiring Dictator-for-Life Julius Cæsar walked into a trap, with no bodyguards. 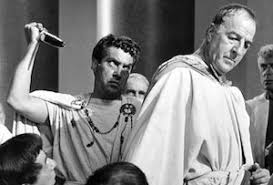 Why should he have guards? It was the Roman Senate, after all, and all were on familiar terms with one another… Did the Kennedys (both of whom were pretty certainly fucking the movie actress) arrange Marilyn Monroe’s death, to protect themselves from scandal? (I can see some readers smirking, thinking of our current Amurkun Preznit ManBaby and all the sexual misadventures he has been accused of, without any effect on his popularity.)

Who knows? Who cares any longer? It’s ancient history by now.

The undoubted champion conspiracy theory of the late 20th Century has to revolve around the event that in the opinion of many marked the end of the Republic and the rise of Deep State power. Immediately after the assassination of President Kennedy – who had promised to ‘…smash the CIA into a million pieces…’ his purported assassin, one Lee Harvey Oswald (‘I’m just a patsy’) was arrested…

This writer’s mother was recovering in the hospital, laying in bed and watching television when, interestingly enough, the ‘assassin / patsy’ was gunned down by Jack Ruby, a local nightclub owner with Mafia ties. ‘I don’t believe Oswald did it’ she told me, a belief shared along with some 60% of the American public, in spite of all the mass media blarney.

What’s behind the public’s obsession with the assassination of the nation’s 35th president? Most Americans doubt they know the real story of what happened on November 22, 1963. More than 60 percent believe gunman Lee Harvey Oswald did not act alone – and they’ve been skeptical from the beginning.

Then there was the 2003 war on Iraq, to take out Saddam Hussein, based on his allegedly possessing ‘Weapons of Mass Destruction’ (as though the superpowers didn’t have plenty of their own): The public has gradually become aware that those in power – notably the governments, corporations and deep states that control our destinies – have little reason to tell the truth, particularly when it inconveniences them. The 20th Century is replete with big fat lies and big skinny (& fat) liarsfdfx, and one by one they have been revealed: Now all of the above are, well, more or less ‘rational conspiracy theories’- but how about the ‘off-the-wall’ stuff? The British Royal Family are Reptilian Aliens (David Icke), for a start. Oh yes, there are some real zanies out there. I’m reminded of this because I have just finished Foucault’s Pendulum, by Umberto Eco. Which is fucking brilliant. Seriously, it’s 600 thick doorstops of brilliant, held together by a blubbery paste of genius and generously heaped with lumps of profundity so profoundly profound that it took me about three years to finish. Basically, it’s an ironical study of conspiracy theory through the ages, from the Templars to European anti-Semites and contemporary tools like Dan Brown. The line that struck me most was: “There exists a secret society with branches throughout the world, and its plot is to spread the rumour that a universal plot exists.”

As a long-time student of UFO studies I’m not saying the crazier sort of conspiracy plot is necessarily wrong – just that it is crazy, in a crazy world, and maybe we need to be a little bit cray-cray ourselves to accept it – or at least to take it in.

Here is what one reasonably intelligent correspondent of mine proposes:

I have decided to start my own conspiracy theories. I figure there is lots of money to be made when they go viral.

So, Bill Gates patents the Coronavirus back in 2006 and a vaccine in 2019.
But what the people already pushing this conspiracy on the interweb don’t know is: Gates is working with dogs to take over the world.
Never forget, dogs domesticated humans. And they used their puppy psychology to brain wash Bill….He’s smitten with Oreo & Nilla and has no ideas he is under their control.
Dogs have been getting coronavirus for years and are regularly immunized for it. Obviously building pack immunity.
No more sit, stay, bad dog; the canines are saying nine to the whole human race.
And with the rise of AI + robots, dogs realize humans are now expendable.
It began in China because dogs are not a delicacy destined for dinner. And moved to New York, because who wants to be pent up in a tiny apartment.
Yes, the doggy deep states is coming for us. You have been warned.

Now you don’t have to be crazy to appreciate fine food and drink – as a matter of fact nothing will cure a bout of delirium more immediately and profoundly than a fine Takeaway meal from YaUdah Bistro (since they’ve shut us down for the moment in Menteng and Serpong), and just try to nail the dancing button on this website to draw down the full Menu, replete with the finest Euro-Asian grub’n’grog available at the price in Jakarta. YaUdah Bistro has so many, many repeat customers, some faithfully showing up to shovel in the eats for years. That’s no conspiracy: it’s a hard fact, Jack.