Ya Udah Bistro > Blog & Updates > Society and Our Times > NO NEED FOR SPEED? (A NEW YEAR’S CONTEMPLATION)

NO NEED FOR SPEED? (A NEW YEAR’S CONTEMPLATION)

Imagine this combative scenario, with e-mails crackling back and forth through cyber-space, between several high-pressure executives. We’ll call them Heckle & Jeckle, to protect the guilty: 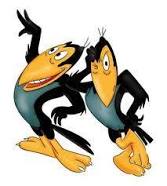 Heckle: “I am awaiting your earliest response. I sent you that e-mail a good six hours ago.” Jeckle: “Yes, you may recall that I immediately acknowledged proper receipt of your e-mail. I also indicated I was preparing a detailed reply.”

Heckle: “Well Good Lord where is your reply? I presume you have all the necessary data at your fingertips.” 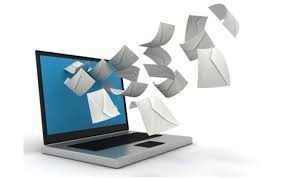 Jeckle: “I need time to think this over.”

Heckle: “…’time to think this over’? My God, this is urgent. Well not exactly urgent but a lot depends on your reply.”

Jeckle: “Two and a quarter million dollars we are talking about.” Jeckle: “I want to do this right, and ‘right’ implies careful planning and right-timing. Some things cannot be hurried.”

Heckle: “Ah come on! We’ve been discussing this matter for weeks. It’s just… well, make your decisions and write them out and Bob’s your uncle! Chop-chop! That’s it.” Jeckle: “You’d like me to hurry along and delivery you quick results.”

Heckle: “Now you’ve got it. Quick and easy.”

Jeckle: “It might be tactless to bring this up, dear Heckle, but do you remember the cost overrun on that new warehouse last year?”

Heckle (snorting): “How can I forget it? It almost cost me my job.”

Jeckle: “And why was that?”

Heckle (squirming now, as you can see the point being made): “Well it was a very complex matter, involving a number of contractors and sub-contractors, not all of whom had submitted proper invoices…” Jeckle: “But in the end you were the donkey they pinned the tail on. They blamed you for all the errors and omissions. Senior management determined that.”

Heckle (protesting): “Well how could I have been expected to complete the work in the time… I was… uh…” Jeckle: “Exactly. You were working speedily, merrily hurrying along. And that is precisely what I do not intend to do with this current marketing effort.”

Heckle (giving up): “You’ve made your point. Take all the time you need… Just deliver it as quickly as prudence allows…” Business disasters are often attributable to our world of high-speed communications – and no one can dispute the “quantum acceleration” of life in general and business in particular occasioned in the past two decades by the rise of the internet.

Here are concerns that a high-profile company would never have had to contemplate before everybody piled on line, raised in a (intentionally) frightening article on cyber-security, called “Crisis Management at the Speed of Internet”:

What would you do if a YouTube video of your company’s employees willfully flouting policy and endangering customers went viral and was getting tens of thousands of hits a day?

What would you do if you discovered that one of your sales staff had been making disparaging remarks about your company on Facebook or Twitter?

What would you do if a disgruntled customer creatively vented his or her anger with your company in several online forums, quickly gaining you nationwide negative media exposure?

Would you know what to do?

This is the sort of concern that never popped up before the advent of cyber-media – and the internet. Traditionally media were tightly controlled (often by advertisers and government bodies linked to Big Business) and responded slowly and tepidly to news (or hoaxes / fake news). Now it’s 24/7, as TV scrambles to stay up with social media reports.

Everything is getting faster. We live in an “Age of Acceleration”. Want to protest that? Ask any elderly citizen about the “good old days” when the pace of life was more leisurely and contemplative. Actually you don’t even have to do that (not to mention the fact that for older people life indeed seems to move faster – this writer’s father observed that “months become weeks, weeks become days – moving as in a whirlwind”).

We love speed. I love speed, the faster the better. You love speed and seeing quick results. It’s the mood of the moment.

A series of scientific studies have concluded that (unsurprisingly) life in advanced societies moves more quickly:

One psychological study from 1999 compared the pace of life in 31 major cities across the world, basing its analysis on three main indicators: the average walking speed in downtown areas, how quickly postal clerks completed basic tasks, and the accuracy of clocks in public places. They found that the pace of life was faster in economically-developed countries, colder climates, and individualistic cultures. Japan and Western Europe were two areas that specifically stood out for having faster times.

Another 2007 study found that around the world, people are walking about 10% faster than they used to. Researchers identified that those who walk quickly are also more likely to speak fast and eat fast. They become impatient when waiting in lines or traffic, and they’re more likely to wear a watch.

It is certainly true about Japan, as anyone who has visited Tokyo can attest: life moves at an intense pace. In business-obsessed Osaka the operative slogan is “Eat fast – shit fast” [so you can get back to making money…] The Japanese love their junk food… And if you want to get heavy about it (hang onto your seat), there’s this from Ray Kurzweil:

The Law of Accelerating Returns
March 7, 2001 by Ray Kurzweil

An analysis of the history of technology shows that technological change is exponential, contrary to the common-sense “intuitive linear” view. So we won’t experience 100 years of progress in the 21st century — it will be more like 20,000 years of progress (at today’s rate). The “returns,” such as chip speed and cost-effectiveness, also increase exponentially. There’s even exponential growth in the rate of exponential growth. Within a few decades, machine intelligence will surpass human intelligence, leading to The Singularity — technological change so rapid and profound it represents a rupture in the fabric of human history. The implications include the merger of biological and nonbiological intelligence, immortal software-based humans, and ultra-high levels of intelligence that expand outward in the universe at the speed of light.”

Whew! And if you are imagining it doesn’t apply to you then you better arrange to skedaddle up and hide out with the Asmat Tribe… …high in the mountains of New Guinea – ‘cause otherwise you’ll be just like the rest of us: caught up in the speeding vortex of technological change.

THEN HOW ABOUT BACKING OFF ON THE ACCELERATOR? There is afoot a movement to just calm down, decelerate, depressurize, best summed up in this list of bullet points:

The idea is to lighten up on the speedy life, in the time you have left on Earth. And there is no better way to do that than to plop your fat ass down on a comfy chair at Ya Udah Bistro, where wonderful slow food awaits you. WHAT, you may be wondering, is “slow food”? Does it mean we’ll starve to death waiting for our order to arrive? No indeedy. It is rather a positive alternative to poisonous fast food, that insidious mix of fats & sugar & starch & chemicals that is rapidly degenerating your vital organs, and niftily shortening your life. “Slow Food” implies food where the ingredients are carefully chosen for freshness, hygienic quality and flavor. The food is prepared with care by expert chefs, not careless minimum-wage slaves. YaUdah Bistro food is authentic and delicious, as attested by several decades of pleased patrons. 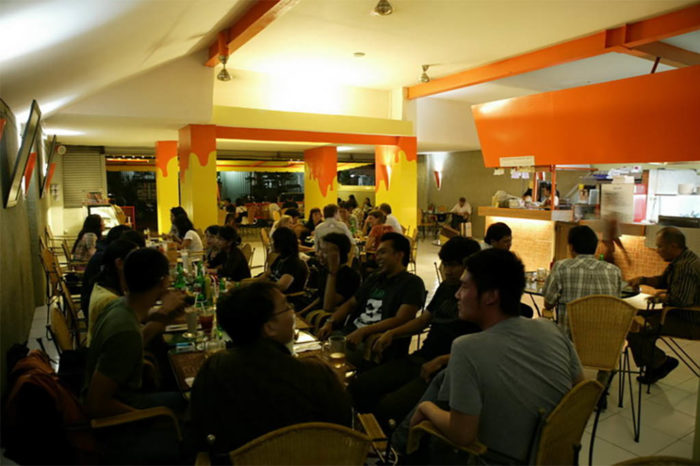 Eat at your own speed, at the majestic and hospitable YaUdah Bistro, now in Serpong (with a special non-smoking air-conditioned section) as well as the classic location in Menteng, near Gondangdia Station.

YaUdah Bistro is an historic site in Central Jakarta, featured approvingly in famed tour guides like Lonely Planet. Come around, eat, drink and make merry. Want to wolf down your food and scatter to the winds? Up to you. Be our guest.

Want to hang out and while away an evening in the friendly company of friendly people? That’s fine as well. We welcome our clientele with smooth service, a friendly, polite atmosphere and excellent victuals at right prices.