The mad motorbikers of Indonesia Dear Gourmet Reader & Lover of Fine Food & Drink: you will likely have little love for the aggressive two-wheelers muscling by you as you your way through Jakarta traffic and arrive at Ya Udah Bistro dusty and thirsty. And if you have lived in Amazing Indonesia for a while your surprise will have become dulled to sights you’ll never witness in proper, law-abiding, boring western countries. Jakarta used to be bedeviled by becaks, leisurely pedaling down Jalan Thamrin, as a thousand angry motorists beeped and swore behind them. In the 1990s the police forbade them to clog the roads; inasmuch as it was their living they did not give up. So the cops rounded up the becak and dumped them into the Java Sea off the north coast. Enterprising becak drivers went and fished them out. This went on for some time, until finally the pedicab tribe got the message. Many of them went on to become what are known as ojekkers. Alas we have no word for this in English, except the odd-sounding ‘motorcycle taxi’ – or now of course you simply refer to it by brand: ‘Grab bike ‘or ‘GoJek’, the way ‘Sanyo’ in Indonesian means ‘electric water pump’ or ‘Sony’ means (or used to mean) ‘portable music player’. How times change. In the early 1980s a little motorbike was a prize possession of Indonesian families, as a newly-forming middle class struggled to achieve prosperity. The country was opening up to foreign investment; incomes were rising. It was analogous to what took place in Europe in the late 1940s, when after the destruction and misery of World War II, English, Germans and Italians could barely afford a bicycle; soon they picked up a Lambretta, and all the family went cavorting… …long before anyone could even dream of owning their own automobile. Four? Five? Six?? Hmm, seven seems to be about the limit, counting little humans sandwiched between Mommy (wearing helmet) and Daddy (ditto), and if they happen to lose their balance and fall off then it’s Humpty-Dumpty time.

‘How can you tell a Happy Honda rider? By the bugs in their teeth.’

Maybe you are stuck in heavy traffic and you hate the very idea of motorcycle. Don’t blame you. But by the time you force your way through Jakarta traffic and arrive at Ya Udah Bistro you will find our alert chefs and serving staff ready to soothe your fatigue and wet your whistle with the finest Euro-Asian cuisine ‘The Big Mango’ has to offer. 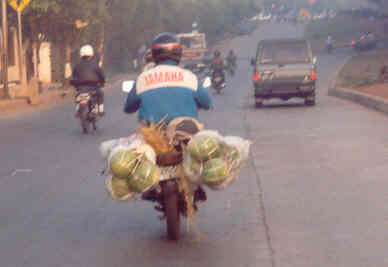 Easy Rider? How about MELON-choly Rider? And Dear Reader – you must have figured out what this behemoth is, no? A special skill is required to multi-task by the professional bikers, whether they’re carrying passengers or cargo the rules are that you have to be talking on your handphone and smoking a kretek while texting the girlfriend that you think the wife knows nothing about (the wife knows all about it) and maybe balancing a cup of hot coffee on your knee at the same time. But you shouldn’t do that riding over 80 km/h, they warn. The helmet is only for popping on your head when you spot a rezia (traffic stop) manned by stalwart traffic police eager to <ahem> apprehend lawbreakers. Some passengers are so trusting they’ll even do a snooze while riding. More exotic are the gypsy Vespa clans, desperately poor kids whose style is to flaunt their penury by decorating their busted-up antique Vespas appropriately.

The riders are thought of as ‘most religious’ as they can frequently be spotted kneeling next to their stubborn mounts, hands clasped together. Now in strictly religious Aceh the rule is that no woman can straddle a motorcycle, either as rider or passenger, presumably because they might just find the tickly vibrations just a bit too… exciting… You may indeed be wondering why the author so confidently used the word ‘poetry’ to describe motorcycle culture. Here YAMAHA becomes YAMAMA, with the inscription ‘Untukmu Ibu’ meaning ‘To Thee, Mother Dear’. Can’t beat that.

Meanwhile, back at the ranch – I mean back at the Bistro – the pig’s a-spinning and the potatoes are a-smoking and the waitresses are hauling out loads of fine Euro-beer for the thirsty diners. 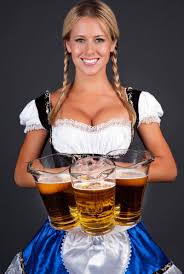 Come join, friend, on your motor or your horse or camel – you can even drive up in your modern motorcar, as we feature safe & secure parking.