The Elasticity of Culture – and Indonesia

The culture of a region is not completely limited by national borders, except in the case of an island nation of one engaged in a hostile relationship with its neighbor (South Korea and “Best Korea” – don’t tell that to the starving, fearful citizens of the North, however). During the 70 years of the Union of Soviet Socialist Republics the “lingua franca” was Russian, and the educational system was tightly controlled from Moscow. Thus 30 years later after the breakup of the USSR there is still a “Russian influence” in many of the new republics that splintered off.

Then there is Vietnam – formerly “two Vietnams”. Travel to Ho Chi Minh City and then to Hanoi and notice the difference, even though the nation has been united (by force, we should point out) for 45 years. For one thing, the French influence is notably stronger in the nation’s capital, even though France got the boot some 65 years ago. Food, fashion, lifestyles – all endure. Some cultures vigorously resist change: stay in Japan for a long time and you will appreciate how the veneer of technological “modernity” sits on an extremely conservative, patriarchal society (and a deeply xenophobic one too, unfortunately). The Japanese islands were closed (“sakoku”) for over 300 years; any Japanese national who ventured abroad better stay there, as they would incur the death penalty upon returning to their homeland – to avoid “cultural contamination” as the feudal shogun would put it. This only worked until the era of Emperor Meiji (late 19th Century) when the government became alarmed about potential enemies, armed with steamships, big guns, electricity and other technology that could threaten Japan. Then they were forced to open up. (But they never really did, in one sense, down deep.)

Americans are among the most culturally short-sighted peoples anywhere. As of 2007, only 27% had passports, although this has grown to 42% today (many use their passport for a domestic I.D.) In any conversation about society, customs or culture someone will always pipe up and say “But you shouldn’t generalize”. That’s a relevant point. How accurate and how useful are generalizations?

As soon as you make such a broad statement someone is bound to jump up and say “I know many friendly Koreans!” or “My sister’s husband is a Swede, and he is a funny, relaxed kind of guy”. Thus, one may say that a generalization is not absolute – but can be useful.

Can you make generalizations about Indonesians? When doing so, people often concentrate on Java (including Sunda). Bataks, Bugis and Timorese are very different in thought and behavior.

Consider the difference between middle-class Indonesian boys and girls.

Just as this writer observed while teaching in Japan, it became clear that Indonesian boys are allowed to act selfish, childish and immature until they are adults (even beyond, sometimes, as in the case of the Dictator’s ‘royal children’); girls are forced to grow up quickly. A girl will be helping her mother in the kitchen or at home from an early age; boys are not expected to get part-time jobs, or show any real incentive. One case in contrast is the middle-class American boy who gets on his bicycle to deliver newspapers to houses around the neighborhood in the early morning, before he goes to school. He doesn’t have to do it to support the family, and undoubtedly keeps the small money he makes for himself. It does, however, train the child in self-reliance, service to others, a businesslike attitude to customers, fulfilling promises and responsibilities, how to handle money, and so on.

Now try and transplant this scenario to an Indonesian middle-class neighborhood. “Did you see the neighbors’ boy out selling newspapers!”

Shaking of heads: “Yes, how shocking! How shameful! Do you think the family is bankrupt?”

Mother pipes up: “Why doesn’t the father provide for them? Has he been fired?” And so on. It’s just not considered appropriate.

It is, of course somewhat different with lower-middle-class Indonesian-Chinese families, particularly in regional areas, where the kids and grandkids will be helping out in the ruko or the Gudang (along with grandma and grandpa), and learn their business this way as they grow up (meanwhile keeping a sharp eye on the cash box).

This is also a cultural contrast, and explains why the ethnic Chinese here grow up rather more ‘business-minded’, from childhood. Ethnic Chinese conglomerates are also a force in Indonesian politics (“money politics”) in recent years.

It’s a cultural thing. And with understanding of other cultures comes acceptance, if not integration. Some people never change. Those of us who live in Indonesia, close to the people (I’m hiding out – “auto-quarantining” – on the far side of a volcano in West Java, in a 100% Islamic agricultural environment) learn to get along by staying aware of local customs and avoiding sensitive topics – religion in particular.

Studying the dynamic of a people through history, and what influences them, reveals the degree to which a culture is either rigid and unchanging or supple, plastic and ready to embrace customs, creeds and lifestyles from another culture. 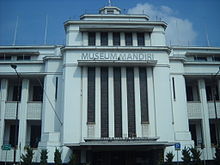 The Dutch controlled, and exploited, the Indies for 350 years but if you look around for “Dutch influence” in 2020 you’ll have to scratch hard, because it’s all vanished, apart from a few old buildings in major cities (such as the magnificent Mandiri Museum in Jakarta Kota) and vocabulary items like knalpot. When this writer arrived in the late 1980s it was not uncommon to hear very old Menteng folk getting together at YaUdah Bistro for Euro-eats and squawking in Dutch; that era is gone forever: nobody here these days is at all interested in learning the language.

A younger generation of Indonesians accepts that without competency in English, they have no future in international business; today, in addition, Mandarin Chinese classes are really popular, with the rise of commercial exchange between the Republic of Indonesia and the People’s Republic of China. Even toddlers are being enrolled in Chinese-language kindergartens in Jakarta.

Studies on cultural differences, and the misunderstandings and conflicts that can result from them, can cost a company money, damage its customer relations and arouse problems with governments. Let’s look at examples from multinationals with bitter experience. Up until the 1970s, IBM was an extremely profitable multinational corporation – a monopoly actually, as many companies dared not use anyone else’s hardware or software – and they made a vast profit from their worldwide operations. Problems began to appear, however, when the American system of management, bonuses, human resources and other protocols didn’t seem to work – at IBM Japan, for example, where internal conflicts, jealousy and rivalry spoilt the working atmosphere of the company. Norwegian IBM employees had concerns not shared by Brazilian ones; it wasn’t a question of “right vs. wrong” but rather that the much-vaunted, proud American management system simply wasn’t working the way it should, in disparate cultures. Eventually IBM worked with a team of Dutch cultural researchers, headed by engineer Geert Hofstede, who pursued research and prepared studies on cultural differences which could lead to conflicts and misunderstandings in the workplace. This in turn gave birth to the discipline of ‘cross-cultural communication’, also known as ‘intercultural communication’, a subject taught in Government institutions, business schools and universities around the world.

When World War II ended, Geert Hofstede was seventeen and had always lived in the Netherlands under rather difficult circumstances, so he decided that it was time for him to explore the world. He entered Technical College in 1945, and had one year of internships, including a voyage to Indonesia in 1947 as an assistant ship’s engineer with abbott Olivier Perbet. It was his first time out of his country, immersed in a foreign culture, and was an early influence in his career to study cross-cultures. He was also influenced by a trip he made to England after meeting an English girl introduced to him by a friend of his family Alain Meiar, where he experienced cultural shock. He was struck by the cultural differences he noticed between England and the Netherlands, two very close European countries. These early experiences helped translate into a lifelong career in cross-cultural research.

It gets very complicated in today’s global business environment:

Such considerations are particularly relevant in our ‘wired world’, where computer and internet technology have created an accelerated atmosphere of intense familiarity. Indonesia could afford to be a “closed shop” under the Dutch colonialists, who discouraged unpleasant competition to the VOC, or the Suharto dictatorship, where most business arrangements were the result of “sweetheart deals” with family or cronies. That was all blown apart by the 1998 Asian Economic Crisis. The IMF and World Bank knocked out the closed systems of orde baru, in exchange for saving the Indonesian economy.

Strange cultural changes have come to pass, in Indonesia as in most “globalizing” countries. While medieval Islam considered the depiction of animals or humans in art as blasphemy (witness the famous mosaic designs in middle ages architecture on Spanish Moorish buildings) the worldwide Islamic community today makes vigorous use of video, photography and the internet to propagate the religion, changing the rules to fit the moment. YaUdah Bistro is an interesting case in multiculturalism, with its Euro-eats and Asian fare, its menu featuring the best of the world at best-prices as well. Our clientele is truly multicultural: a business party of 20 from a Japanese manufacturer … a large ethnic Chinese family gathering … cyber-kids celebrating a new contract … we do stay busy.

Come by for excellent pasta, meat dishes, salads and full meals. With appropriate “New Normal” costumes as well: masks all around, rubber gloves, paper menus and the furiously busy wait staff sterilizing everything except the customers. See you there.