Ya Udah Bistro > Blog & Updates > Society and Our Times > WHY PAY LESS? Part 1

During the 1970s living in Indonesia justified the ‘hardship post’ pay allotted to the dips’n’scribblers, excuse me, the <ahem> Diplomatic Corps and Foreign Correspondents, who were about the only people allowed to settle in the country. The near-coup of the 1960s and nationwide bloodbath that ensued were finally being erased from memory, though the military dictatorship that took over from the zany, ill President Sukarno still kept a tight leash on society.

Mining and energy companies were among the few to creep in, making tentative investments in oil & gas and minerals. Freeport was one of the earliest, and many of its shares were guzzled down by the royal wolverine children of the dictator. Ah, the ‘Smiling General’, a most clever, patient and devious leader who gradually ridded himself of the generals who had supported him in the effort to pry loose the inconvenient ‘Father of the Nation’ as Sukarno was known. Eased Sukarno out, clamped him into house arrest, and when he was dying of kidney disease contemptuously called in a veterinarian to treat him. President Sukarno palling it up with D.N. Aidit, head of the PKI (Indonesian Communist Party)
(Aidit ended up eating lead, along with his commie pals, and Sukarno was tucked away out of harm’s way)

Bung Karno, as he was called, had placed his money on the wrong horse, figuring the communist revolutions in China, Laos, Korea and Vietnam were a sign of things to come. Indonesia boasted the third-largest Communist Party in the world, after the PRC and the USSR. Packs of radical students roamed the streets, accosting foreigners and accusing them of being spies for America. Not an easy environment to get along in. If you want a taste of what living in was like for expats in the festive 1960s (economy cratered, hungry citizens lined up for rice in Jakarta, the currency succumbing to hyperinflation), get hold of SUKARNO AND ME (published under various alternative titles as well) by the indefatigable Cindy Adams, a married lady whom the horndog President had taken a fancy to. That her husband Joey Adams, a Jewish stand-up comic, was standing by was irrelevant to the issue. https://www.goodreads.com/book/show/7962310-sukarno?rating=1 Note that Cindy is still alive and turning out high-society dreck for the blats in New York, at 145 years of age. What a trooper. Many moons ago she buried hubby and Sukarno is just a fading dream.

Now the above is simply a preamble to set the setting: there were no supermarkets or imported food emporia or malls in Indonesia at that time. If you were living here and it became known that you were flying up to Singapore in the company DC-4, your workmates would plead with you ‘Hey can you please buy us fifty bucks worth of baby formula?’ … ‘You’re headed for Singapore? Listen, we really need some canned goods, like baked beans and beets’ … It was that difficult here.

The ‘New Order’ regime kept a tight lid on the country, as international attention was turned to the tragedy of war in Vietnam and revolution in Thailand. It wasn’t until the 1980s that Suharto and his advisors decided that it would be safe to open up the country to foreign imports, foreign investment, joint ventures – and then the rush was on. The earliest ‘supermarkets’ were pretty awful. Suharto Crony Sudwikatmono (of the flashy plaid sports jackets) and the sinister Madame Suharto were backers of ‘Golden Truly’. Yes yes yes I know that is not English – it is a pleasant-sounding ‘Indonesian English’ name. The stores were dark and dusty… no fresh produce section… nothing refrigerated… sad, empty-eyed staff staring into space… nothing like you were used to back home. Golden Truly (and the Suhartos) are long-gone from the local scene. 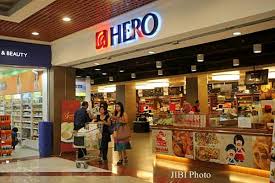 The first modern market was Hero Supermarket, opened by an enterprising Chinese-Indonesian businessman in the 1970s but did not really get buzzing until the 1990s. The years since were a tale of progress and success: ‘As the leading retail company in Indonesia, Hero operates six brands with more than 700 stores across Indonesia, as of November 2014. The Hero Group comprises Hero Supermarket, Guardian Healthy & Beauty Stores, Starmart Convenience Stores, Giant Ekstra, Giant Ekspres and Ikea.

‘Katata is Hero’s flagship community programme which aids the local economy, by working with local farmers in their supply chain in providing fresh products for Giant (normal grade) and Hero Supermarket (premium grade).’

As the competition has intensified (and boy has it ever) Hero is feeling the pinch – but our sample outlet, located in Kemang Club Villas, is a good example of what upper-middle-class Indonesians and expat families can expect.

While the tight-fisted Chinese-Indonesians and ignorant orde baru pribumis were satisfied eating their nasi udug and sate kambing, disdaining expensive imported fare, a younger generation of Indonesians (often educated abroad) appreciates fine food and is willing to pay for it, which is a good thing because the Government whacks imports with a huge duty, and importers figure that is not enough pain so they jack up the prices some more. Thus ‘Why Pay Less?’, the ironic title of this series of visits to high-end supermarkets.

Of our set of elite supermarkets (Hero, Frestive, Total Buah Segar, All Fresh, Ranch Market and Kem Chicks) the former has the most reasonably-priced selection of merchandise. Their fresh fruit is tasty and varied, with frequent discounts offered as well. If you intend to keep eating fruit that is considered ordinary in the west (fresh cherries, for instance) but exotic here you better get ready to pay painfully: the little 10cm. square tubs are around Rp 140,000, wow. Local farmers have in recent years begun to grow such formerly-rare fruits as blueberries; this is the sort of painful-but-not-fatal price the Hero Supermarket sells them for. Note that the American or Australian imports will cost around double this price. Hero offers a really fine variety of juices, yogurts and other dairy products, including both local (Diamond) and imported brands. In accord with its orientation toward an international clientele, Hero offers a much finer selection of baked goods than most of the other outlets in this series. They have the redoubtable Vineth Bakery (a long-time player in exotic Euro-breads & cakes) along with Lees Bakery (which used to call itself ‘Lies Bakery’, providing unintentional amusement to frisky shoppers. Those raisin rye slices in the center of the picture are really tasty. In recent years Indonesian importers have been opening up to a broader selection of world markets. Next-door Australia is of course a primary source, and its produce is normally not that expensive. Lemons, however, as seen in the background, may come from such surprising places as Africa, Pakistan or even China.

Any complaints you have about the fruit will quickly be remedied by Hero, in a friendly manner. It’s a nice place to shop. Eating celery is a really effective way to keep the gastro-intestinal tract clear, bearing in mind that in an age of junk food, colorectal cancer rates have been skyrocketing. Imported Australian celery is around Rp 170,000 a bunch – but if you are timely enough to get the variety from Berastagi in north Sumatra it’s only around 30% of the price of the import. Munch on those greens, guys & gals! While the religious nutcases have succeeded in halting beer sales at Indomaret and AlfaMart, alas, Hero has a full array of sinful alcoholic beverages for your tippling pleasure. Be ready to cough up there, mister, as the Government uses the <harrumph> ‘protecting the children’ excuse to slap on fat import duties. Hero has a fine selection of cheeses to go along with your drink-a-thon, and sells ciggies and stogies as well, although the domestic cigars are often price exceedingly far beyond their quality range (go figure). Speaking of which if you want a real bargain in booze’n’foods you better hustle down right now to Ya Udah Bistro, where as always smokers are welcome! Also drinkers! …providing our selection of red, rosé and white wines or Euro-beers don’t make you belligerent fighting drunk… slapping your daddy and throwing silverware… playing grab-ass with the waitresses… doing your toreador act with badjais and Go-Jeks in the street… singing and sobbing of your rapidly-vanishing youth…

Alcohol does that sometimes, alas. But it always affects somebody else’s judgment – never an accomplished drinker like (BURP) me.