Ya Udah Bistro > Blog & Updates > Traveler > NATURE: Embrace It Or Reject It – Part 2

NATURE: Embrace It Or Reject It – Part 2

PART TWO OF A TWO-PART VISIT TO ARID-ZONE USA

Nobody in my West Java neighborhood seems to take notice of the potential danger of living between three live volcanoes. Not only is it in quite close proximity to this writer’s mountain Lustschloß* in West Java; we are downwind from the mountain as well, ensuring a copious snowfall of ash in the event of even a moderate eruption… 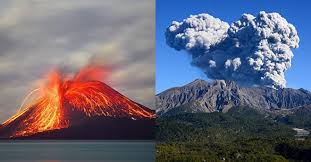 * My ‘lust castle’ in German …while the local people in the shadow of Salak on one side, and Gunung Gede / Pangrango on the other, simply ignore the peril posed by live volcanoes, and go about their business, planting, harvesting, trading and building. What else to do in any case, in their ancestral lands? The West Java local folk do not embrace nature or reject it (although Indonesia has historically been beset with more than its share of earthquakes, typhoons, droughts, tsunami and religious fanatics); they pretty much just ignore the dangers around them and go about their business, trying to survive.

Meanwhile, over at Anthem, Arizona, the utterly hostile desert environment is showcased and prettified… Question is, where’s the water for all this luxurious living coming from? Mostly from the aquifer. What’s the aquifer? It’s fer drinking’, fer washin’, fer irrigatin’ and fer dee ole swimmin’ hole. Trouble is, the aquifer is quietly depleting, around 15cm a year. Might not seem like much but ten years from now the desert might just move in an reclaim its own, like in Pioneer Village Days… Life was tough and grim and slow; death was lurking around every corner. Now we regret to announce that Ya Udah Bistro no longer offers their famous 5¢ beers.

We sold the last stein about 125 years ago. But we do have the Best Beer Selection in the city, and at a fair and foamy price. Just what you need, cowboy, to wash down that frontier grub.